5 Day Golden Triangle to Agra and Jaipur from Delhi

Discover the splendid historical monuments of the beautiful cities with our Golden Triangle Tour 5 Days, wherein we would take you to the journey to Delhi, Agra and Jaipur’s most ancient and historical monuments that holds its own story in itself such as India Gate, Qutab Minar, Jama Masjid, Chandni Chowk, Khari Baoli, Lotus Temple, Taj Mahal, Mehtab Bagh, Hawa Mahal, City Palace and many more. Visit Taj Mahal that symbolizes the love and is counted in the one of ‘Seven Wonders of the World’. In Jaipur, view the most amazing impressive and amazing palaces that would grab all your attractions like Hawa Mahal, Jal Mahal, Jantar Mantar, Amer Fort, and City Palace. At the end of the trip, cherish the beautiful memories and our royal greetings, while we would drop you at your desired location in Delhi.

This 4 Nights 5 Days Golden Triangle Tour will commence with our driver picking you up from your Hotel, airport or any location of Delhi NCR to enjoy the full day Delhi city tour. You would be discovering the Delhi’s Architectural beauty such as Qutab Minar, Red Fort, Humayun’s Tomb, Lotus Temple, India Gate, and drown yourself into one of the most happening markets of Delhi such as Rikshaw Ride to Chandni Chowk and Khari Bhaoli, specifically known as Spice Market.

Red fort is considered to be as one of the iconic tourist attraction and historic monuments located in Delhi. This Fort got its name As Red Fort because it is made from the red colored sandstone. Red Fort was built by the Mughal Emperor Shah Jahan in the year 1638.

Chandni Chowk is one of the oldest and busiest markets located in central north Delhi. The market is so happening and well known for Indian ethnic wear wedding dresses. It is an incredible hub of the latest fashion at the most affordable prices.

Jama Masjid is one of the largest mosques in India, built on 10m elevation in India; it was built by the Mughal Emperor Shah Jahan and is perhaps the most magnificent mosque with the great architectural work.

Khari Baoli is a popular street market in Delhi, known for its wholesale grocery and wholesale spice market of all kinds of spices, nuts, herbs and food products. It is considered to be as the trove of exotic condiments.

Humayun’s Tomb is constructed out of red sandstone and it is considered to be as the first-ever garden style tomb to be constructed in India by Mughal King, Humayun.

Qutab Minar is counted in one of the tallest brick minaret built in the year 1206 and is designed with the help of an incredible architectural style.

India Gate was built in the memory of the Indian soldiers who lost their lives serving the nation in World War I. It was designed under the British rule by British architect Edwin Lutyens.

Lotus Temple, as the name suggests is a unique lotus-shaped structure monument based on the Bahai House of worship, is the prominent attraction in the city.

You would be drive passed by the Parliament House and President’s House.

Parliament: Parliament House is popularly known as the Sansad Bhawan, consists of the two houses, Lok Sabha and Rajya Sabha. The Parliament House of India is constructed in a way that it has a central hall topped with a domed structure and the three semi-circular chambers.

President’s House: Rashtrapati Bhavan(President’s House) is home to the President of India, having one of the largest democracy that epitomizes India’s strength, pride, and traditions.

The new day of the tour will begin with the journey towards Agra, post having the breakfast. Upon approval in Agra, check-in at the hotel and we have planned your visit to Mehtab Bagh and would stay overnight there only.

Mehtab Bagh is a garden designed in the square-shaped and measures 300 meters on each side. It is a typical Mughal styled garden with four garden layouts and holds the ultimate Taj Mahal viewing spot.

Overnight stay at Jaypee Palace or Courtyard by Marriott or Similar 5 star hotel.

The new day starts by witnessing the beauty of Taj Mahal, which is symbolic of the love that looks more beautiful in the rays of the Sun.

Visit Taj Mahal during sunrise and take a guided tour from inside.

Taj Mahal is a noteworthy glorious monument as is one of the Seven Wonders of the World that holds its glory even after so many years of its construction. This marble structure was built by Mughal Emperor Shah Jahan in the memory of his beloved wife, Mumtaz Mahal.

After sightseeing, we will take you back to the hotel, where you will relax and have your breakfast. Post that, we would check out from the hotel and would pay a visit to the Agra Fort and from there only, we would proceed towards Jaipur.

Agra Fort is an ancient and historical fort in the city of Agra. It is being said that it was the main residence of the emperors of the Mughal Dynasty until 1638 when the capital was shifted from Agra to Delhi.

We would proceed towards Jaipur. Upon arrival at Jaipur, check in at hotel.

Start your morning exploring the beauty of Jaipur, Post having the breakfast, we would take you to pay a visit to Amer Fort, Jal Mahal, City Palace, Jantar Mantar and Hawa Mahal.

Amer Fort is an old fort which was built with the red sandstone and marble in the year 1592 by Raja Man Singh. The Maotha Lake adds a certain charm to the entire Fort and beautifies it.

Jal Mahal is a huge beautiful palace made from pink sandstone built in the middle of the Man Sagar Lake, in the heart of Jaipur that grabs all the attention of the tourists.

The City Palace is one of the cherished attractions in the city. It has magnificent pillars, carved marble interiors that make the palace more beautiful.

Jantar Mantar is considered to be one of the largest observatories ever constructed. It is a splendid reminder of the royal heritage of Jaipur.

Hawa Mahal has brilliantly conceived design and style made the palace as the masterpiece. It is popularly known as the ‘Palace of winds”, built in the year 1799 by Maharaja Sawai Pratap Singh.

After breakfast at the hotel, we would proceed towards the journey back to Delhi. While you cherish the memories of the tour, we would drop you back to your desired location in Delhi, Noida or Gurugram.

You may opt for drop in Jaipur as well.

Pickup offered from Your hotel, New Delhi airport, railway station, or other desired pickup location in Delhi, Gurgaon or Noida.

Return to your Delhi hotel, Delhi airport, Delhi train station, Jaipur Airport, or any desired location in Delhi, Gurgaon or Noida.
Pickup time options: 7am, 9am, 10am and 11am
3 pm, depends on traffic. 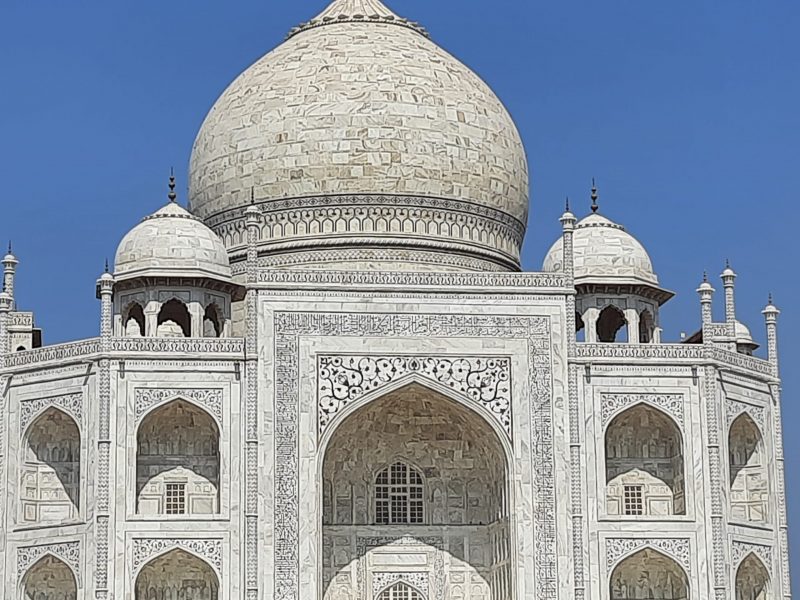 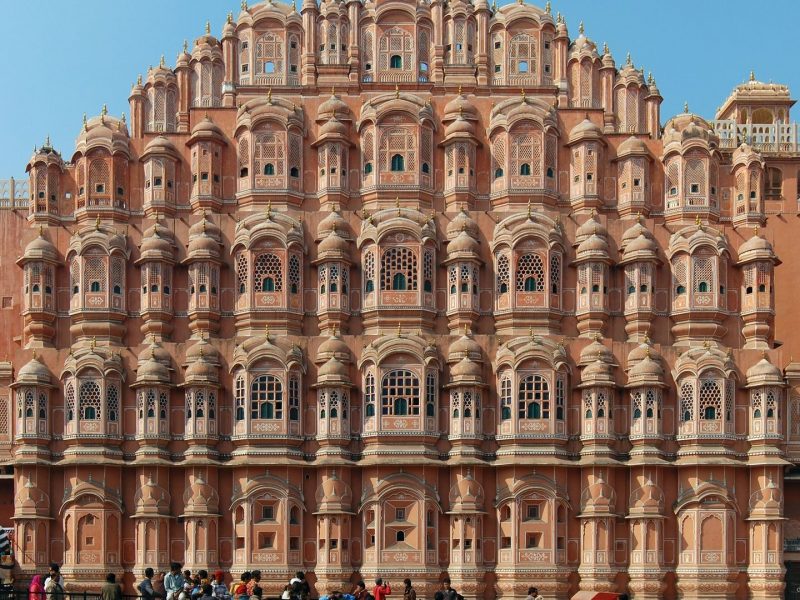 Day Trip to Jaipur from Delhi by Car 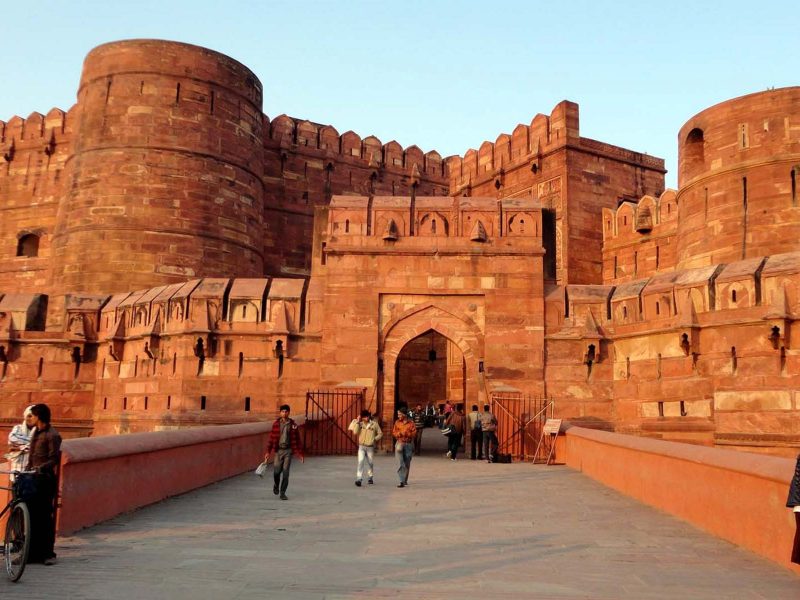